Waging the Cold War: the origins and launch of Western cooperation to absorb migrants from Eastern Europe, 1948–57..

This article reconstructs the gradual process leading the Western powers to cooperate to absorb migrants from Eastern Europe, from the February 1948 Czechoslovak coup d’état to the 1956–57 Hungarian crisis. This study reveals that cooperation in managing migration became a significant part of the Western Cold War strategy. This cooperation was first a way to contain the Soviet Union by reducing the pressures affecting Western countries bordering Eastern Europe – with a focus on the German predicament. It also became an offensive strategy aiming at encouraging outflows from Eastern Europe to weaken Communist governments. Only cooperation at a Western level could achieve those goals.

Reviewed in: H-Diplo (with Author’s Response). 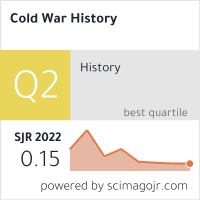